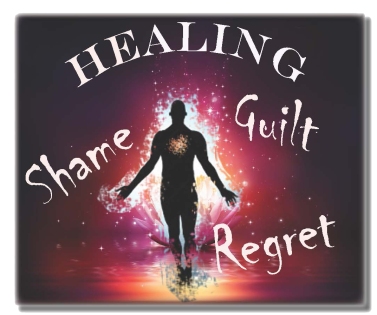 It’s important for your healing to understand the difference between guilt, shame and regret.

Because unless you understand the cause of these emotions and actually ‘feel’ them rather than trying to ‘forget’ them (which never works), the aftereffects can be wounding, negatively impacting everything in your life from your relationships to your career. They certainly affect your happiness, or lack of, and trigger you to continue making unhealthy choices – ensnaring you in a trap of your own making as mentioned in Part 1.

Guilt arises from doing something you knew wasn’t right at the time, but hoped you could get away with and not get caught. The incident could be legal, moral or ethical in nature. Some people are sorry they were caught but not remorseful. Some people can be affected so negatively by their guilt that they go into depression, even contemplate suicide. They wrongly believe they can’t ever forgive themselves over their mistakes, that they are unworthy of love, of respect, of goodness, of life. Unworthiness results in a repetitive cycle of self-punishing choices – an “I don’t deserve anything good’ attitude. Don’t believe it! There is hope for you. There is help. Stay with me on this. What do you lose by giving yourself a chance? Nothing. But you have everything to gain.

Regret is generated from within, a negative self-recrimination from committing some type of wrong, either intentional or accidental. Regret can stem from action or inaction, like when we could have made a better choice than the one we made. Or we could have done something or said something that would have helped, but we didn’t, and is now too late. Regret aches painfully inside us because we can’t go back and fix the damage. It hurts. And keeps hurting, for years if we let it. Regret can also result in feelings of unworthiness. The good news is that regret can also inspire a determination to do better next time, turning a negative into a positive. How do you accomplish that turnaround? Keep reading, and don’t give up.

Shame is usually the emotion that causes the most severe negative self-esteem. Shame is generated from outside influences like society, family and peers who tell us we should feel badly about ‘something’. They try to debase us through humiliation, rejection or criticism because they believe we failed them and aren’t good enough, won’t ever be good enough. Bullying falls under this category. A ‘charming sociopath’ uses this technique to manipulate and control, doing their best to destroy our self-esteem and self-worth. The good news in this category is that they succeed in mistreating us only if we let them. Don’t allow anyone to disrespect you. Yes, such a stance requires courage and faith. But you can do it. During this series we’ll work on strengthening your confidence and belief in yourself. Choose empowerment.

In the next several posts we’ll address healing solutions. Solutions that can turn your life from negative into positive, from sadness into joy, from feeling impotent to powerful, from false unworthiness into a true, amazing worthiness beyond anything you’ve ever imagined. Stay with this series. You can do it!

The ideas, concepts and opinions expressed on this blog site are intended to be used for educational purposes only. The blog pages are available with the understanding that the author and contributors are not rendering medical advice of any kind, nor is the information on this blog site intended to replace medical advice, nor to diagnose, prescribe or treat any disease, condition, illness or injury. The blog author and blog contributors claim no responsibility to any person or entity for any liability, loss, or damage caused or alleged to be caused directly or indirectly as a result of the use, application or interpretation of the material on this blog site.